Last weekend the “RACE FOR THE CURE” took place, the most far-reaching digital race throughout the European continent, which brought together associations and actions to fight against breast cancer. 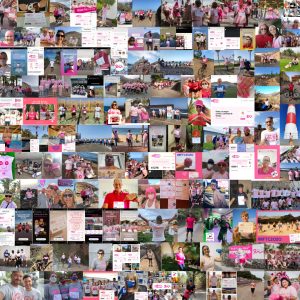 On July 15th, the Foundation Carrera por la Vida Walk for Life launched the race representing Spain and opened the registration period. Two months of promotion, diffusion and awareness to ensure that the great digital race would have the maximum impact in our country and thus improve the quality of life of the more than 500,000 women and men who are diagnosed with this disease every year in Europe.

The effort by the Foundation and its volunteers has been rewarded with 2,240 registrations and more than two hundred teams that have walked with their hearts this weekend. Due to the sanitary situation from COVID19, the celebration of multitudinous races in Europe was impossible, so it was decided to opt for this digital race with the participation of 32 countries.

Of all participating countries, Spain has occupied an excellent fifth place in the number of registrations and showed one of the greatest impacts on social networks and media. Anonymous people, families, institutions, companies, sports clubs etc from all over Spain showed their support throughout the weekend to the 130,000 women and men who are diagnosed with breast cancer in our country each year, and filled the networks with photos and videos in which they walked, ran, swam and gave demonstrations of solidarity and support to those affected and their families.

For Brigitte Gypen, president of the Walk for Life – Carrera por la Vida Foundation, “the challenge of being the only Foundation that organised the digital race in Spain for the first time was a bit nervewrecking, but the number of registrations, the affection and support received have exceeded all the expectations of participation that we had”.  The more than two thousand registrations, and the support as well as sponsorship from institutions and companies, have allowed us to raise an important part of the funds necessary to maintain the Carrera por la Vida Walk for Life Foundation activities and projects.  Much needed in this moment of a pandemic, as it makes the health and economic process of breast cancer even more difficult without a doubt.

Utilizamos cookies propias y de terceros para fines analíticos y para mostrarte publicidad personalizada en base a un perfil elaborado a partir de tus hábitos de navegación (por ejemplo, páginas visitadas). Puedes configurar o rechazar la utilización de cookies indicándolo en el siguiente selector.
Necessary Always Enabled
Necessary cookies are absolutely essential for the website to function properly. This category only includes cookies that ensures basic functionalities and security features of the website. These cookies do not store any personal information.
Functional
Functional cookies help to perform certain functionalities like sharing the content of the website on social media platforms, collect feedbacks, and other third-party features.
Analytics
They are used by the Web portals to create browsing profiles and be able to know the preferences of users in order to improve the offer of products and services. They allow the control of geographic areas of greatest interest to a user, the information on the web that is most accepted, etc.
Advertisement
Advertisement cookies are used to provide visitors with relevant ads and marketing campaigns. These cookies track visitors across websites and collect information to provide customized ads.
SAVE & ACCEPT
Powered by